“Friday Five” is a weekly short interview feature composed of five questions answered by students, alumni, and faculty. This week, we talked to alumnus Jacob Stebel from the class of 2011.

Since graduating from Stony Brook Jacob has travelled cross-country, written two feature-length screenplays, written and performed audio sketches for the PB&J Comedy Podcast, and is in the planning stages of producing a children’s TV show. He currently attends Teachers College at Columbia University and is finishing up his final student-teaching placement at The Cinema School in the Bronx, where he teaches 11th graders Film Production, Screenwriting, and Literary/Film Theory.

Tell me about a skill you learned as an English major that has helped you out in the “real world.”

The most important skill I learned from being an English major is how to find, develop and maintain my own voice while writing for a specific audience. This is an invaluable ability to have in your personal and professional lives. As you enter or advance in the workforce, you will likely need to learn how to harness all of your communication skills, creativity and other strengths in order to both complete tasks and work well with others.  We’ve all had the experience as English majors of learning that some of our professors react to our writing styles differently than others.  By learning to adapt, while staying true to who we are as individuals, we become versatile, dexterous assets to any organization lucky enough to have us.

Which text was your favorite to read as an undergraduate? In which class did you read it?

It’s a toss-up between The Brief, Wondrous Life of Oscar Wao by Junot Díaz (read in Emily Churilla’s EGL 373 – Non-Western Literature) and Dragon’s Egg by Robert L. Forward, which I read in Bente Videbaek’s not-to-be missed Literature of Science Fiction class (EGL 394)! The latter novel is one that I doubt I’d have come across on my own, and it’s a wonderfully dense and well-written exploration of an alien culture’s development. It’s “world-building” at its finest.

If you could give one piece of advice to current undergraduates, what would it be?

If you aren’t already doing so, treat your classes like they’re a job you need to prepare and be on time for.  You, via your family/loans/life savings, are paying for an opportunity to interact with the brilliant students and faculty that Stony Brook has in abundance. Get to know these people as well as you know your assigned readings; the networking opportunities and friendships with professors and peers alike are invaluable.

Which text do you suggest all undergraduates read before they graduate?

Oh, jeez… that’s a tough one! I guess that if I had to pick one, I’d recommend a deep reading of James Joyce’s Dubliners.   I often come back to several of the stories in that book and remain awed by how Joyce implicitly speaks to his fellow countrymen in an attempt to rally them away from despair and passive romanticism in favor of active, enthusiastic participation in the world as free people. So many of the themes in Dubliners are reflective of the experience of young adulthood in today’s America, and I think all undergraduates can learn much from this wonderful text.

English majors are known for writing a lot of papers. Tell me about the most memorable paper you wrote for an English course.

Joaquin Martinez Pizarro’s “Epic Literature of Antiquity” course (EGL 390) was among the most rigorous courses I’ve taken. After a brief period of being wildly intimidated by both the rigor of the class and Dr. Pizzaro’s expertize, I found myself relishing the constant quizzing and pressure to contribute to class discussion.  The most memorable paper I wrote during my undergraduate career is the one I wrote for his midterm assessment, in which I compared the evolution of the warrior-ruler between the Ancient Babylonian Epic of Bilgames/Gilgamesh and King David in Samuel I & II. The title is “From Warrior-Heroes to Rulers: A Comparative Study of The Babylonian Epic of Gilgamesh and the Old Testament Story of King David” and I’m still very proud of it!

Stony Brook Basketball is on the Rise by Tom Cassidy ’71

The loss to Iowa in the second round of the NIT was a heartbreaking end to the best season in the history of Stony Brook University’s basketball program.  As a longtime season ticket holder, I have been amazed to watch the basketball team climb from being the perennial underdog to three time league champion. Keep in mind that when Stony Brook moved to Division I, they were ranked last among more than 300 colleges which prompted some creative students to make posters that said ”nowhere to go but up!”

Sure, I was disappointed that the Seawolves lost a close game to Iowa, but not demoralized in any way, shape or form. The Iowa team played an incredible game on their home court in front of fifteen thousand supportive fans, but Stony Brook stayed strong and consistently came back from adversity until time ran out.

However, even more important to me as an alumnus of Stony Brook University and a Long Islander, is that the coaches, staff and especially the student athletes on the basketball team are outstanding ambassadors for the University. Win or lose they keep their composure, shake hands with their opponents and prepare for their next academic and athletic challenge.

Intercollegiate sports are an important part of the complete college experience. According to Arne Duncan, the United States Secretary of Education, “Student athletes learn lessons on courts and playing fields that are difficult to pick up in a chemistry lab. Resilience in the face of adversity, selflessness, teamwork, self-discipline, and finding your passion are values that sports can uniquely transmit. Many of those character-building traits are every bit as critical to succeeding in life as book smarts.”

Last year the Stony Brook baseball team “shocked the world” at the College World Series. However, if the Stony Brook basketball team plays in the NCAA Tournament next year, it won’t be a shock, but rather it will be expected. After all, as Coach Steve Pikiell said about his basketball team “You can see we’re going to be good in the future.”  I can’t wait to renew my season tickets.

Tom Cassidy (1971) is a Clinical Associate Professor at the School of Social Welfare at Stony Brook University. 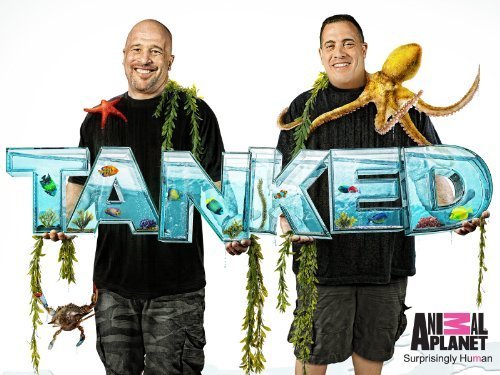 Which text do you suggest all undergraduates read before they graduate?

During your time at Stony Brook, who was your favorite professor and why?

Professor Scheckel was my favorite English professor. I enrolled in every one of her classes that I could take. She always made class enjoyable with her bubbly personality and her genuine love of the topics she taught. I credit her essay assignments with helping me to develop better analytical and writing skills.

Which text was your favorite to read as an undergraduate? In which class did you read it?

Anything by Edgar Allan Poe. In Spring 2012, I took EGL 375: Literature in English in Relation to Other Disciplines with Professor Scheckel when the topic was the works of Edgar Allan Poe. Our class spent the whole semester reading through Poe’s short stories and looking at the different ways Poe’s stories have been depicted, such as graphic novels and movies. I had the time of my life in that class.

Tell me about a skill you learned as an English major that has helped you out in the “real world.”

I learned how to approach different life experiences by thinking outside of the box. As a volunteer First Responder for the Huntington Community First Aid Squad in Huntington, NY, I apply the skills I gained as an English major to my volunteer work. I’m currently seeking out my EMT-B certification, and have found that my time as an English major trained me to quickly learn and analyze large quantities of information that could be applied in any situation.

If you could give one piece of advice to current undergraduates, what would it be?

Take advantage of help when it is offered to you. Visit the Writing Center, attend office hours, and talk to your classmates. It was my experience that professors are excited to help and eager to answer whatever questions you may have. My best essays were ones that I discussed with my professors and my classmates.

devastation, including the loss the human life. Within the South Shore Estuary Reserve,

sewage treatment plants were compromised by the storm, permitting hundreds of

which is now wider than the Shinnecock Inlet. Beyond the storm, the spring of 2012

estuarine waters, and were responsible for the deaths of finfish, shellfish, and even

pets. These blooms were supported by land derived nitrogen loading that increases

annually suggesting these events may intensify. This presentation will review these

occurrences, their interconnected nature, their lasting impact, and options for

may become more common or more intense in the near future.

The lecture will be preceded and followed by a reception

School of Marine and Atmospheric Sciences 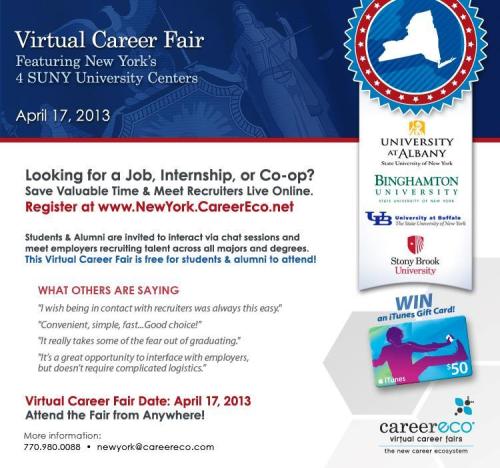 For students & alumni from Stony Brook, Binghamton, Albany, and Buffalo.

Full time and summer jobs in all industries will be posted.

Stony Brook University and Stony Brook Medicine are competing for two grants through the LIVESTRONG Community Impact Project. Both of these grants will bring needed services to support families fighting cancer in our community:

(1) The Creative Arts program will offer an arts program for       our cancer patients in an outpatient setting    (2) Camp Kesem will offer one week of sleep-away camp for       children of cancer patients Visit these two sites — voting is permitted only once per day per email address — to help bring these programs to our community: Vote to provide a creative outlet for our cancer patients throughLIVESTRONG’s Creative Arts: http://vote.livestrong.org/regions/7/167-Stony-Brook-Cancer-Center Vote children of cancer patients experience camp in a supportive and fun setting through LIVESTRONG’s Camp Kesem: http://vote.livestrong.org/regions/7/29-Stony-Brook-University Your vote matters!

How has Stony Brook had a global impact?
Who are Stony Brook’s newest faculty stars?
How have alumni impacted the lives of students?
How is Stony Brook pioneering medicine today?

Network with fellow alumni and participate in a
dynamic conversation with President Samuel L. Stanley Jr., MD
about your alma mater.